A Lover of Books

Ever since I was very young, I have loved books. There is something about a new copy, not yet read that is magical for me. I love to smell the paper and gingerly run my hands over the front cover and feel of the pages, savoring the text before reading it. It's a memory that goes back as far as I can remember. 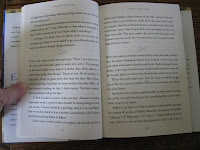 Smell is connected to memory isn't it? Did you ever deeply inhale of your new shoes? When I was young we received shoes twice a year and had two pair, one for church and one for school. When Keds came out we were crazy with joy to have play shoes! I quickly worked on my mom to let me wear the tennis shoes everywhere. I hated saddle shoes and loafers. They may have been stylish but it felt like walking in cement, and the heat so much hotter in those clodhoppers.

I am digressing a little but not really. It was as a school girl that our parochial school often held book sales for fund raisers. We were allowed to go into the main auditorium where piles of books were laid out on long tables. They were placed by grade level but that never mattered to me. What I was after was the front and back flaps of any book that caught my eye. Often my parents would buy me everything that I selected, it was so much better than any holiday. I saved most of these lovely books and left them with my daughter when I moved here. They may be gone.

There is nothing to this day that I like more, than to read curled up in a cozy spot and get completely lost in the world between those two covers. Adversity can be a blessing. I learned to love books when I was young because of profound, undiagnosed near sightedness. My grades did not suffer from my myopic vision because often during the recess I would go up to the black board and look at what was written. It trained my hearing very well to remember what was said.
When discovered by a routine school screening I could not see the big E on the chart. I had to walk nearly up to the chart to read anything. Mother was naturally horrified and also confused why none of the usual signs had presented. She asked me how I managed in school and I told her about staying in at recess; it was perfectly logical to me. I hated recess balls and other objects that would periodically come hurtling threw the air and hit me. It was always to late to react by the time I saw them coming. The world of imagination was much safer and also much more exciting. When driving home with my first pair of glasses on I was amazed that leaves actually grew on trees! Mother wept, and I couldn't understand why.

I already knew how to read when I started school. The primary grades were sheer torture. Each time I received a new "reader" I would go home and read it, then try the next day to return it. Those exasperated teachers would try to explain to me that it was a "reader" and I was to use it at school. The exasperated child would try to explain the book had been read completely and wasn't to good at that. Fun With Dick and Jane were pretty elementary reading.

I was reading chapter books and had a Junior Classics set. My mother also gave me books of nursery rhymes most of them completely memorized before kindergarten. In spite of being constantly in trouble for talking out of turn, correcting the other children's reading out loud, or getting up from my seat; I didn't lose my love of learning or of reading.

When a new copy comes in the mail and I open it, I still feel that bit of flutter and anticipation to see and smell my new book. Is the anticipation because of my enjoying opening the book or enjoying having the book open me? These authors that we don't actually know but do have a reciprocal relationship with. They present something to us and our minds open to receive or we reject. It is incredible the power of written words.

Madeline L'Engle is at the very top of my list right now. I am in love with her writing. I love the way she thinks, talks, and holds discussions as if we are present in her class, or living room. She imparts such a sense of prescence that it is to imagine you are walking at her side viewing each scene that she takes you to; her world revealed. A rekindled appreciation for thinking is stirring between the gray matter in my head, and the soul in my being.

In the "Summer of the Great Grandmother," she is dealing with the severe decline of her mother. Her family spends each year at their country house in New England. Her mother has suffered from dementia for some time, but in this particular summer, just the trip itself sends her off the deep end profoundly. They realize she will never be able to return to her home.
The episodes of fear and outlandish behavior spur Madeline to remember her childhood, her relationships with her parents, and their parents to review her family history back to the civil war. It is an incredible journey, a fantastic marvelous read.

Something happened in my own response to her story. I saw great parallels between her people and mine, between her childhood experiences and mine. My grandparents rode on camels in Egypt and so did hers. Her family was well read and knew several foreign languages as did mine. These people who did not consider themselves to be highly educated because they had no degrees; lived very full and interesting lives!

Which made me think of the strong contrast between their lives and those portrayed in,"Brave New World", by Aldous Huxley and "1984", by George Orwell. The totalitarian government in BNW kept the masses happy with soma and diversions. Games and physical fitness were the chief modes of entertainment and all things "new" celebrated, old things and old people abhorred. I wonder if we have 'soma' now? Would we recognize it if it was in our lives already? What things do we routinely use to "check out" from the world we live in and distress? Zone out, tune out, take a vacation, "a gramme is better than a damn". The government had discovered that keeping people in an infantile state and away from strong feelings enabled them to be easily controlled.

In "1984", we have "Big Brother:, the benevolent government that will rewrite history and current events to subdue the masses, and again medicate and condition the people so they do not even recognize the servitude that is upon them. The interesting thing is that in both stories, books are forbidden. Learning is forbidden, it has been replaced by conditioning. Political correctness is of supreme importance, any infractions reported for the greater good of the society as a whole. Would we even see it? Isn't it already here? Would we realize if we are conditioned? "I love new clothes", "better to spend than to mend", sounds ominously like a TV commercial to me, but in Brave New World, it was part of the multitude of whispers in the night that the government raised children, were subjected too.

How did I get from grandparents that could speak foreign languages and ride camels to that? I hope you made that jump on your own. In that time there was no TV, no media, no Internet. People were very busy with living independent lives. independent of government, independent of the mainstream pressure to conform to the status quo. When you don't have "soma" you live life. People those few generations ago were very much free Americans and celebrated their freedom by working very hard to better themselves. My grandparents( legal immigrants by the way) saw the industrial revolution, the invention of the radio, the electric light bulb, indoor plumbing, the motor car, airplanes, and a man that walked on the moon. To name just a few of the milestones in their generation. It was an amazing time to be alive.

Although I love books, I don't think I have ever had the privilege of smelling a new one that was to be my own. I hug the old ones I purchase subconsciously, though. My youngest daughter fell asleep holing a cookbook open to her chest when she was four, approximately 11 months after she began reading. There is a story behind that, but it shows that my love of books was passed on eaarly to that child.

I, too, remember crying when my oldest got glasses and procalimed that there were stars in the sky. It was hard as a mother to realize she had missed so very much.

Ah yes, a simpler time when you did for yourself and didn't count on government intervention. My grandparents achieved so much in their lifetime...starting with zero.

i feel the same about books had very simular experiences in school with books... and this week got two brand new books... you ready for this... PIONEER WOMAN COOKS and Alton Brown GOOD EATS the Early years!!!!!! OH MY!

What I really think is this is a great post. I loved your description of how you developed your love of reading, and always appreciate suggestions for books to read with information about how the story affected the reader. And your are so right about what an amazing time your grandparents (and mine) lived in.

I *puffy heart* books and have many on my night stand. Reading is such escapism and stress relief. I have to say that I enjoy buying used books that have that softer, loved feel to them.

Not sure where I fit in. But I do know I love books too. If I go into a Barn & Noble or Borders I get a little light headed and overwhelmed. So many books...so little time:)

Love this post, as usual. You know where I stand, I think. If everything except the very barest minimum of government disappeared tomorrow we would all be much better off.

We are readers in this family, in fact, my younger daughter get punished for reading too much sometimes! As in, she will read anytime, anywhere, even when chores and homework need to be done.

I feel like this generation of electronic addictions has contributed greatly to the downfall of America's ability to recognize just how controlled we are all becoming. We went to a movie the other night and the entire time there were flashes of light all around the room from people checking their phones, texting, etc. 2 1/2 hours of that--boy it was ANNOYING!

I have missed you while I have been away from the blog world for awhile. So glad that you are healed. I too am a lover of books, libraries and book stores. I too was astounded to see separate leaves on trees with my first glasses in 7th grade. Kayla took great pictures at the farm!