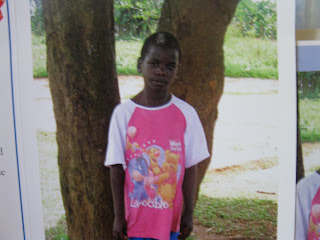 This is my new son. He lives in Uganda. He's only 8 years old and is the oldest of seven. I don't think he has a father. His family lives on about $5 a month, when his mother can work as a laborer.

We think we have problems.

Truthfully, I get tired of all the requests for help. There isn't a day that goes by that someone doesn't call here asking for money. I'm totally sick of political parties of any kind asking me for anything. As far as I am concerned they can all get fired.

It's different sometimes when you meet someone in real life.

At the conference this weekend, we heard a man from Kenya who was saved by someone who gave to him through Compassion International. When this man was 8 years old he watched his little 8 month old baby sister die of starvation. His mothers diet was too poor to make breast milk. He was so frightened that he began to eat from dumpsters after that. Then he pulled out the letter he received from his friend in Canada. A man who wrote to him and gave him hope. He lived, he graduated from college and now he helps other people in his country. He has never let go of that first letter.

I was crying. I was thinking of how selfish I really am. I don't do without anything. Really, I don't know the first thing about giving sacrificially. Giving something that costs me something. I give from my excess. I am disgusted with my apathetic American self. The part of this program that appealed to me is that this is no quick fix. This is not about give your little gift and go away. It's adoption. It's writing to a child, and staying with them for about 10 to 20 years. It's about letting someone who feels hopeless know they have worth.


A lot of ladies that day were picking up folders of the children. It would have been great if every child would have found a sponsor that day, but they didn't.  As I looked at the table and saw the faces, lots of really cute ones; I prayed, 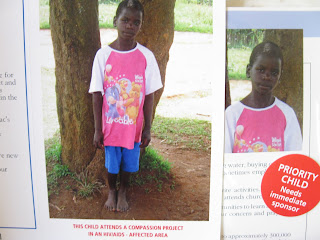 and I saw him. Barely a smile, burdened shoulders, wearing a girls nightie. See the sticker? That means it has already been 6 months of waiting for help. He lives in an HIV affected area. I felt that pull on my heart that said. "This one, he is your new son."

I never had a son. When I was a little girl I used to entertain myself by writing out long lists of names. First names and middle names of both boys and girls; because I was going to have LOTS of babies when I grew up.  When I grew up, I had one baby. I never used birth control ever, I only had one baby.

I thought about my new son's name Isaac. Abraham had Isaac in his old age. I am not 100 but I will be a senior citizen this year. I wrote to my son, his birthday is next month. I sent him a card and a little extra for a present. Maybe he can get some boys clothes or get something for his family. I hope more than anything that what he receives this year is the knowledge that he is worth saving. I hope to see a big smile and some pretty white teeth!

I wish I felt better. I keep thinking about all the other times these people have asked and I said no. One time Kayla came home with one of these packets and I angrily threw it in the trash. I threw a child's chance for help in the trash. I might as well have thrown the child in the trash. I was just sick of everybody's hand being out asking. "It's not like we are rich!" Aren't we?  I spend more per month for my pets, than I will for this boy.

Do you see my son? He has no pockets, he has no shoes.  Without these things he loves to sing and play with little cars.  He helps his mother, he carries water, he goes to the market to try and sell things, he plays soccer.

I can't wait to hear from him. Sometimes we just have these moments in life, when we have an opportunity for blessing. I'm just grateful that this time I didn't say, no.

You've got me bawling. I'm sure many of us can see ourselves in this post. I know I do.

What you really need to do now is include a link to the website for this agency so that other (me) can adopt a child too. :)

You are so sweet. The phone number for compassion International is 800-336-7676 or www.compassion.com. You can chose from a lot of countries. They will tell you about the high priority children if you ask. It costs $38.00 a month for each child or $45 if you want to contribute an extra $7 for HIV medicines.

I don't know I guess for me the time was right because I didn't turn away. I have his little packet by my computer here so I can pray for him. Every time I look at him I cry. If I didn't know better I'd think i was going all hormonal.
This agency uses 80% of all funds for direct relief and that is a good ratio. If you send extra gifts and they don't want you to send more than $25.00 that money goes in full to the child. They do a lot for them. They send them to school help them with hygiene, they feed them and clothe them. they will even do home visits to help the family and provide a child with bedding and mosquito netting. You know we just don't think. The lady that I talked to that was working the booth has adopted 6 children, but you know at least I started.

What would be cool is to do this as a family. Your boys could write letters and adopt a brother or sister and with their sweet hearts; it would give them a sense of doing something good in the world at an early age.

Your a precious woman Kat, I really do appreciate you.

What a great heart you have...and I agree with the money given to political parties..what a waste!
This boy is so sweet, melts your heart. I really HATE how rich people get off the sports and hollywood world, they should be required to support several families!
My church, (The Church of Jesus Christ of Latter Day Saints) has a beautiful program..The Perpetual Education Fund..they go into all these poor countries and give money for people to to get an education and help them find work at no cost to the people and they don't even have to pay the money back, only help in return to others as they can. It has proved to be a great program...and they are always there, first on the scene to all these places hit by disasters to help and stay there helping until people are on their feet again. We give constantly to these good programs...I wish I had a ton of money, I would help all. When the Savior comes again...things will be different...then, the first shall be last..for a change! Come say hi :D

I love this organization, they do miracles. I should introduce you to my 'son' sometime!
I also love Kiva.org..you can invest a few dollars and along with other people the money is loaned to the poorest of the poor in Africa to help start their own business and become independent. Then they pay the money back and you start all over again...it's amazing how far my original 'loan' has gone~~

Such a great telling of how your heart was touched. I especially like that this group uses 80% of their funds for direct relief. It is sobering that there is still so much need in our world.

Thank you for sharing. I think our family will pray about this.

Welcome to the wonderful world of sponsorship adoption! : D God blesses abundantly and you will add more kids as He does. (I guarantee it!)

You are a lovely, loving person K.D. *hugs* to you.

I hope you are able to help your new son lots and lots. Much love.

Linda@ Lime in the Coconut said...

I think you have both just become lucky...graced! Beautiful,touching story.

We sponsor a girl through compassion and I was convicted by your post. I've been doing the monetary part but not emotionally or prayerfully. Thank you for allowing the Holy Spirit to use you and your blog to nudge me to do more. Love you!

What a wonderful choice you make - so heartrendering to see his pic. I am bookmarking this site and am going tomorrow to chose a child.
I WILL NOT donate to a political party at this time - I am however, sending money to carefully chosen conservatives running for office. In this climate, it takes guts and sacrifice to place yourself into the public arena in support of founding values.

Karen, what a testimony! That is such a loving post, and I'm so glad I read it. I'm glad you stepped out, and I know that you will be blessed beyond measure. I love the fact that he is named Isaac, a child of promise, and you are giving him the chance to achieve his promise. :-)

I feel this way about the elderly in America. They ask so little, and they need so much. That's where I volunteer.

I'm so glad I read this. It was a blessing to me. I have been MIA with workmen who are still not finished, but I took a break to blog today. I hope to be back to regular blogging soon.

Thank you for sharing. It blessed me...

Wow you have a wonderful heart Karen. Good for you for sponsoring a child and maybe save their life.

Thank you to everyone who read and commented on this post. I am grateful to read of ALL the organizations who spend their efforts to ease the suffering in this world. I am also very grateful to those of you who decided to adopt! God BLESS you for that!!

It's hard when everyone is always asking for money, but I think those are great causes.

When I told you I had read this post on the phone... I had, but quickly. I decided to come back and read it all slowly because I missed some things. I love your heart. I love your honesty. When you said,

"It's about letting someone who feels hopeless know they have worth."

I cried. Thank you for sponsoring this boy and for writing about it on your blog. Did you know you can put a permanent button on your side bar to Compassion? I have one. Compassion also sends some bloggers to meet the children they sponsor each year and asks them to write about it on their blogs. You should sign up... you never know, they might pick you.

I love you, dear friend.