Big Puppy and a Road Trip 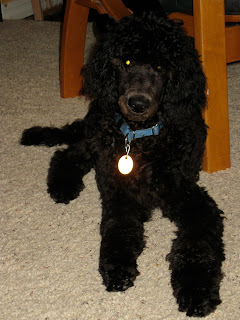 I totally forgot just how time consuming a puppy can be, 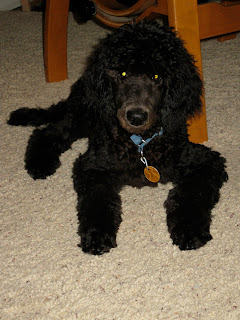 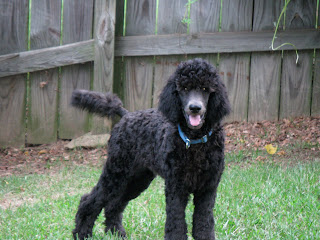 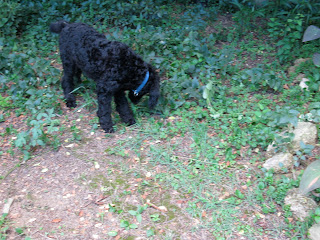 I spend all this money on great dog food with no corn and no by products and then this big galloope eats dirt. He will eat anything, rocks, sticks, bugs, dirt clods...very picky gourmet eater. 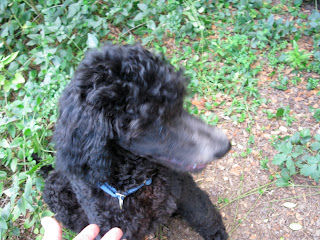 I have to spend a majority of my time watching him. So he doesn't eat something that would get us into trouble. He has to learn everything. Puppies don't come already housebroken. They are good at house breaking! Thank God for baby gates and linoleum. 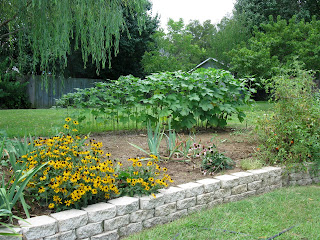 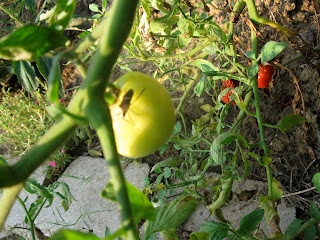 In between puppy training I started cleaning up the garden.  My garden was a bust this year. Too many bugs. My tomatoes made more plants than fruit. Some of the bushes were 6 ft tall, but almost no fruit. The tomatoes they produced were weird. Just weird, I never have seen such strange abnormalities in a tomato before. My farm friends that had 248 plants gave me several boxes of tomatoes that were just gorgeous. I canned salsa and cooked tomatoes. After filling up my pantry I pulled my tomato plants up to get rid of the bugs.  Not exactly your gardener happy ending story, but that's life.  What if we had to depend on that for our living? I guess I would have been out there smashing bugs all day. I told the hubbins next year I'm planting all flowers and a couple of cucumber plants. 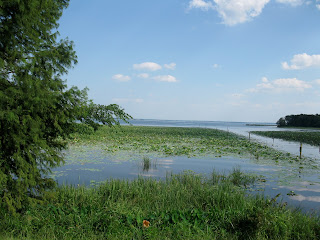 Every now and then my hubbins gets a good idea. He suggested we take a drive and a break. Every new mother needs a break, puppy mothers included. Did I mention that my puppy wakes up early EVERY day? He is doing very well with potty training. His only confusion has been about the carpet, he thinks its grass. We have only had 3 accidents with that. I try unsuccessfully, not to FREAK since it's my brand new carpet. I just had a brain storm and had the hubs cut a piece of the same carpet to fit his crate so maybe he would get the idea we don't pee on carpet. What do you think? Think he will make the association? 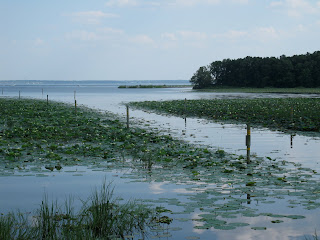 See how I get my mind off of things? Still thinking about potty training, the important issues of life.
Isn't this  gorgeous? 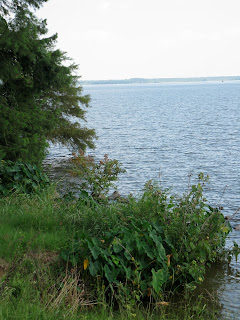 The hubbins was really racking up the points. He pulled over a bunch of times to take pictures. He really got into the picture taking thing. What a great guy. 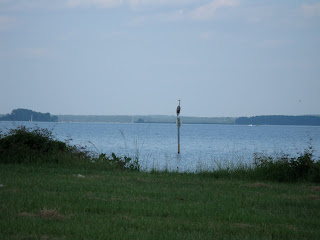 My zoom wasn't strong enough to really get as close as I wanted too. This post was way out in the water. It was so cool to see this crane perched there. We have a bird sanctuary and it is common to see big cranes. We have white ones too but this fella is gray. 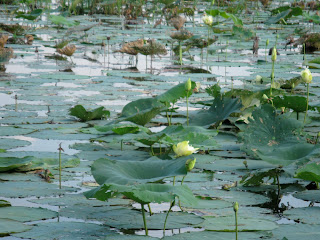 The water lillies are blooming. 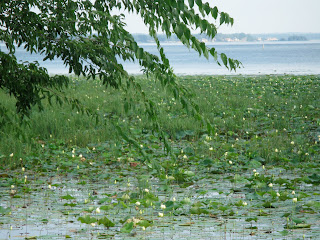 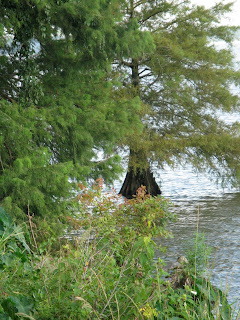 and the cypress trees that grow in the water... 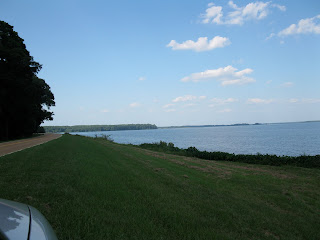 It's about 50 square miles of reservoir. I pretend it's Monterey Bay. 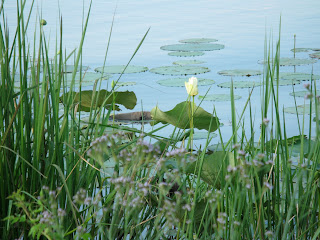 The hubs wanted to see all of it, no puppy no kids. 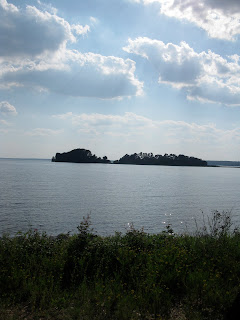 The hubs was relaxing. I was making an attempt at relaxing. I have been very uptight lately.
Kid issues and puppy training, and me old bones are acting up. 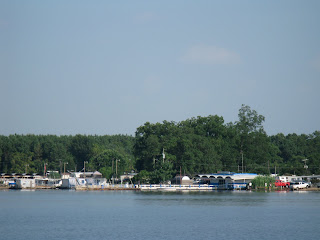 I think he was maximizing his puppy break. I was enjoying the scenery, really I did. I had too,.... 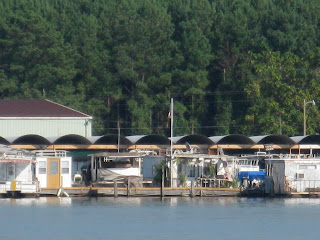 because we went around the whole thing. This is the boat dock. If I was still a hippie and it wasn't hot I might live over here. Houseboats. I could handle a houseboat in the fall. 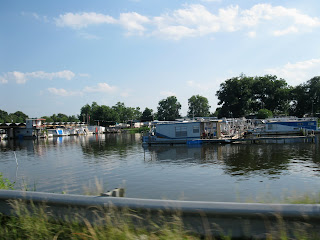 But I'm not hippie anymore and it is HAWT, just saying. It's been the hottest summer ever, a record breaker. 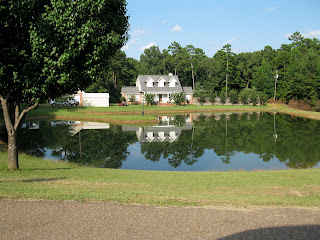 Then we drove through some expensive neighborhoods in the country. Very pretty. I am amazed that some people have million dollar properties in Mississippi. The hubs had to explain to me that we are the weirdos  unusual people who moved from their home state. Most folks apparently don't make moves like that. Because with a million dollars you can live just about anywhere you want too right? It might be an itty bitty apartment in New York, or a double wide mobile home in California but you know---the choice is for the choosing. So why chose to burn up? 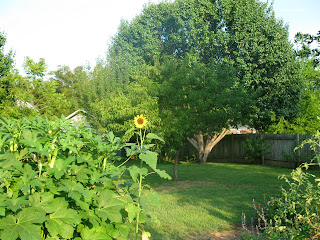 I'll take my modest little place. Actually I have been seriously thinking of down sizing.  When your a gardener it's not the house you live in that makes those decisions tough. It's your 10 year old garden.
It's all the work you and your hubbins have put in over the years. But it is too much for me.

I found a 2 bedroom 2 bath house plan that I really like, with no stairs. Have you ever thought about how silly it is that we spend our whole lives accumulating stuff, and then want to get rid of it?
Some people maybe never do feel that way. I want a lot less to take care of right now. I suppose having bum bones has something to do with that.

In the mean time I'm very busy with this puppy. He is napping right now which is why I am finally blogging. By the way he gets called;
Baby
Roman
G
Ro-G
Puppy
and
luvins...

not bad for starters...
Posted by Karen Deborah at 7:14 AM

Sounds to me like that ride was just what you needed! My hubby and I used to take rides like that too. Very relaxing. Now with four kids, not so much. ;) Although they are good travelers.

I hope you find some more relaxing time. I think putting carpeting in Roman's crate is a great idea! Good luck!

Thanks for the nice road trip! With only 14 miles of road we don't get to do that and I miss it.

I know what you mean about downsizing, I feel that way lately too and I don't have brittle bones. I think it has to do with the prompting of the Holy Spirit to simplify and concentrate on the things that are really important like loving people and winning people to Christ. That is hard to do when you are preoccupied with "stuff"

I love going for a drive. Always nice to get out of the house and away from things for a while. Love the dog. He will settle down soon.

Sweet pup you have there.

When I finished up the bedroom redo here at the condo, over the weekend, I thought to myself...this place is looking more and more like home every day. I think we might just put the house on the mkt over winter...or at least get it ready...like getting rid of a bunch of stuff!LOL
We are waiting to see how a couple of home sales go, in our subdivision.

The established gardens are what we will miss most.

Baby Roman is really a cutie, even though he can be a passle of trouble sometimes. I'm glad you got to have your roadtrip getaway.
I think the carpet in the crate is a great idea.

Oh--what a sweet Hunny! Mine never wants to stop for me to take pictures! We pass beautiful places in the Blue Ridge mountains on the way to and from our son's---but all my pictures are through the windshield--thru bird poop and dust!

And down-sizing--well you know how I feel about that already. Would. Love. It. Well--we're 'down', and we're 'sized'...but we're cluttered.

Still sitting here, wondering where to start. I think since my mind is cluttered, my house is too. My purse is a great reflection of my mind and my house. A mess.

Anyway, glad youall got to go somewhere---sorry the big boy is taking a bit more "raisin'" than you'd like, but I know he's a love.

Got a wonderful package in the mail today---will write you more later, but thanks so much!! You're a dear. (Wrote deer at first, but not knowing you IRL---I figured I'd better stick with dear! lol)

I love the genius idea to put carpet in his crate. Let me know if it works!

So glad you had that nice getaway...and I so hear you about all the "stuff." We just sold our big house and are in a nice condo while we decide on next steps. All my things are in storage. And I don't even miss a single item. Small is the new living well.....

Together We Save said...

Your puppy is very cute... even if he is alot of work.

You keep saying "the puppy". Does this "puppy" have a name? He's really beautiful. Is he going to get bigger"
I think your area is very nice. It's prettier than Monterey Bay... greener and more lush.
Lovely photos.....

farmlady I listed about 6 of his names. His official name is Roman Gabriel and yep after the quarterback. My hubs likes football. I trip up over all of that and it ends up being Ro, Raymond- Romano- puppy- baby--hey you. My memory ain't what it used to be, or somethin like that. Maybe it's just a tongue twister.

Ha ha.. potty training.. we are still working on that too with Coco.. who's most commonly called name right now is 'you little shit!'. lol
The painting.. yes I agree it should be lower on the wall... but with little grandkids who might stand on the couch with grubby fingers .. we decided higher up would be more prudent right now! *smiles*

Sheesh... I meant to say .. your photos are lovely, wish I was there right now.. I'm freezing!

My puppy was 27 pounds at 7 weeks, and he just kept on going! You gotta love a big ol' dog. What's more amusing than a giant puppy falling over things and acting goofy, after all? Love your scenery pictures; it's almost as good as being there!

If we had to live on what we could grow we'd all be very hungry indeed!