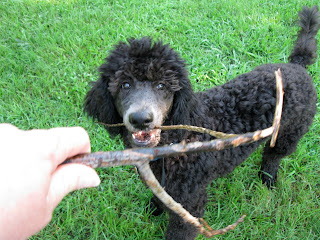 Today I began my experiment with making a large amount of home made food for the dog. I also purchased an 11lb pound bag of Wilderness Salmon Food by the BLUE dog food company. A representative was at the store today. I found out more about the company. It was started by people who lost their dog "Blue" to cancer. I talked with her for awhile because these people like me, were unaware of the huge problem of cancer in canines until their dog got sick. Cancer is as high as 40 and 50%.

Unbelievably vet medicine does offer chemo and radiation and all the therapies that are offered by humans. Having worked in oncology for humans I cannot even imagine putting an animal through that. I don't know if they practice pain management or not. When I took Roman to the vet for his rabies shot and his little checkup, I sat next to an old man whose little old dog had cancer. He was paying for her to have surgeries and chemo, she was just trembling all over. I felt so sorry for them both. I wondered if B12 would help her nerves. Poor dog. It was so sad that old man loved that dog so much. But why spend thousands on therapies and feed cheap junk? I don't know what he fed her I didn't get into it. That would have been mean. A lot of folks around here buy good old Rob Roy at Walmart.  Everything in this life takes awareness.  First we have to ask the question, what is in food?

I put my first dog down before he got really really sick. He was such a magnificent dog I couldn't bear to let him slowly deteriorate. I also knew how aggressive his cancer was and did not want him hurting. It was traumatic though, one of my most painful experiences in this life. Because of my strong beliefs about the relationship between diet and disease I am applying those principles to my new puppy. There is still no guarantee of course, that he won't get cancer but I will have done everything I can, in advance.

Discovering a company with similar motives was a very pleasant surprise. It is an American made product. The only imported ingredient in BLUE dog food is lamb. They use human grade foods in their products nice to know!

I also cooked. Since the food I make has brown rice in it, I buy the Wilderness, which has no grain in it at all.  I know about the puppy food thing but puppy food gives Roman the runs, and I'm just looking for a normal poop about now. Which by the way with this diet he has perfect poop! Aren't you excited?
only a nurse can be excited by perfect poop. The smell is no longer gagging a maggot either.

OK so we have 11 pounds or terrific store bought food for $28. about $2.50 a pound. I am just estimating here. Now for the cooking.

The chicken in the pot was $4.50, I bought one that was hormone and antibiotic free, but not organic.
Organic chickens are about $13 a piece. 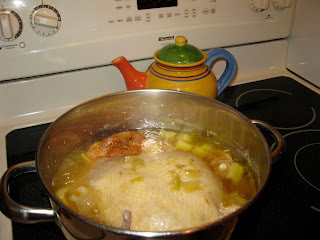 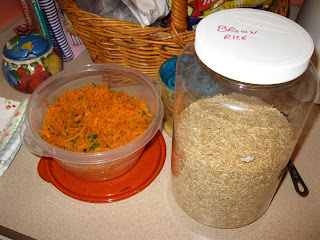 When I boiled and deboned the chicken and ground it up in my food processor I got 12 cups. I used all the skin and what some people would throw away.  Anytime you buy ground chicken salads they usually have got every bit of usable stuff in them. I used to work in a deli, I know about that. Whatever hot chicken didn't sell the day before gets ground up for salad. Since he is a puppy the skin and fat won't hurt him. If he was out killing his supper he'd eat the stinkin feathers. 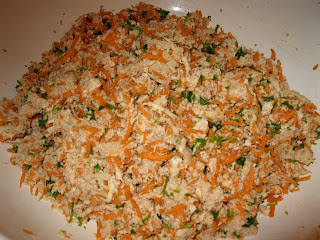 While the rice cooked in the broth I mixed the grated raw carrots and a bit of parsley together. I used my hands to feel for any bone pieces I might have missed. I found 2 small ones. I learned that trick in the deli too. After the rice was cooked I blended all of this together. It tastes great. No seasoning, no ONIONS
dogs cannot eat onions and just a little bit of salt. They don't need salt but I just couldn't help myself. My hand is addicted to the salt can. Even a tiny bit of salt goes a long way in taste.
I spent about 2 hours and $10 and made 14 pounds of food.
I process the meat because he barely chews. I don't see any reason to cook the carrots. The rice is enriched by cooking in the broth. You can't beat this! 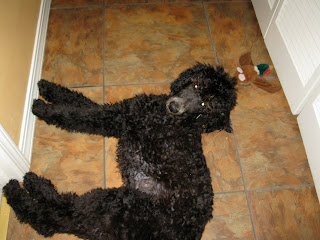 So my plan is to feed him about a cup a day of dry food and 2 cups of cooked.  We will see how long it lasts. I have 2 containers in the freezer and a big one in the fridge.
I made a smaller batch earlier in the week and this puppy loves this stuff.
While I was cooking he was lying by my feet groaning and yipping. He really wanted it. I told him to behave and not be such a little pig.
My husband has never cared if I cooked for him. I baked him a pound cake. I finally have an appreciative male to cook for, a little 4 legged one. I think it's hilarious.
And on a more serious note I also think it's imperative for his health. I hope he lives to be really old, and dies of old age without being sick.
I hope and pray that for my hubs and myself too.
Posted by Karen Deborah at 6:17 PM

sounds delish! and yay for great poop!!! It's a lot of work but it is worth it to me, we lost two dogs to cancer and I fed one of them home cooked so I'm not sure but I know I feel better about it since I know what's in there. Happy cooking/baking...

We have a store that sells Blue here and I've been very impressed with the ingredient list. Now I know why.

Blue Buffalo is right around the corner from me. They are great people!

That's so cool MPM, do you know more about their story?

I read you are supposed to grind up the bones for all the minerals.
Susie

I have fed our Aussie Terrier Evo[by Innova] from the start, human grade ingredients, no junk. She gets a little chicken or veges too, I am hoping we can keep her healthy. Minimal immunization too.I read labels, her treats are Evo too or dried chicken breast made in USA NOT China!
Our sweet four legged companions deserve the best.