We have been sweltering in the heat. With 97% humidity a person can break a sweat inside the house. Either that or I am having uber hot flashes. This week the humidity dropped to the 80's and it feels like paradise.
My week has been very interesting. Roman got sick and had a big BLOW out of diarrhea in my Hunny's man cave. not once, twice, but three times. Seventy pound Roman still lives. I was looking into adopting a beautiful basset mix and I had to shut up about it. Even I know when I am just licked.

This is Ginger isn't she beautiful?

It's time to start cleaning up the yard. It's a jungle out there. It's been too hot to do anything at all so I am way way way behind.
I have been trying to catch up on your blogs. Watching Heather move to the middle east has been cool. I'm green with envy over the beautiful clothes she is buying there. GORGEOUS http://wattsfamilybythesea.blogspot.com/2011/08/all-things-new.html

and then reading about Connie's traumatic fire!!!! http://overgoodground.blogspot.com/2011/08/leaving-my-heart-to-flames.html  and while your there read her post "Seeing Red" she explains how to have your e mail address in your return so it's not "no reply to comment" you don't want to know how many replies I typed a response to that went into cyber space. My brain is blonde. I'll give proof by the end of this post. 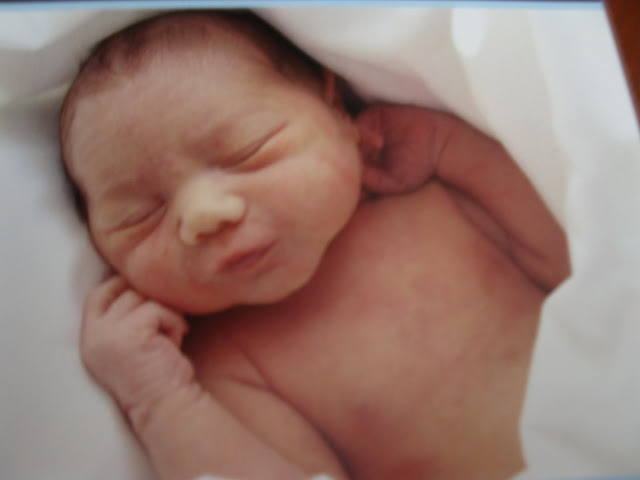 Our newest grandson born one day before my birthday. He actually missed being on my birthday by a few hours. Got some chubba cheeks on him doesn't he? Another one out in California what a heartache to have so many babies out there. This one is named Caleb. I can smell his little newborn smell in my imagination.

Oh and Katie has a big fun surprise. http://paintsplashes.blogspot.com/2011/08/little-or-big-behind.html
Her mom is going to be cooking with Ree and she is going too. I told Katie if she doesn't make something I might be sick. She is a fabulous cook in her own right. Her sourdough bread's are beautiful and she makes tons of home made gourmet foods.

I'm sittin with a little old lady a couple of afternoons a week and luvin it! It's about all I can manage but it gives me a pick me up mentally. I'm also teaching bible Study on sunday mornings to a small woman's class.
Jojo broke her ribs in a fall and that about killed me to read and I am really behind catching up on Trudy--my sweet bluebird. I don't know why but I am just struggling to keep up with life. I think of ideas to write about and don't. I see pictures to take and don't. I still can't sit for hardly any time since the trip to the beach. Riding in the car really set my hips back.

Jen has been rearranging and redecorating the whole house and it looks fabulous. No, I haven't taken pictures.
No news from me usually means I don't feel good. I would rather blog when I'm up! So there you have it. People are moving and changing and having all kinds of struggles so who am I to whine? PASS.

Focusing on what is good and making that lemonade out of lemons is still what I think makes us better it helps me and I can be the biggest sourpuss of all. Except for being with my daughter which can be so hilarious. The following is a real life joke.
TWO BLONDES AT THE MALL.
The two of us went shopping at the mall. When we were ready to exit we went up to the glass doors to leave. There are 4 sets of double doors there. Jennifer walked up to the first door and stood there waiting and nothing happened. I followed her. She moved to the left to the second set and stood there, nothing happened and I followed her. At the third set she started getting upset and said, "MOM all these doors are broken how we get out of here?" At which point my brain kicked into gear and I said, "push it." It opened. Jen took a rapid glance over her shoulder to see if anyone had seen us and said, "Let's get out of here!" Yes this is true, and yes we laughed. We laughed for three days and now I am laughing again. Sometimes real life is better than anything.
Posted by Karen Deborah at 11:27 AM

Hahaha!!!! You ladies are priceless! I love that doors story. Just the laugh I needed. Well done! :)

Congrats on your BEAUTIFUL baby grandson!!!! OH. MY. WORD. My uterus hurts. Must. Have. Another. Baby. ;)

Congratulations on your new grandbaby. He is a cutie....you are right, his cheeks go on forever. A new baby and lots of laughs go a long way toward keeping things on the bright side.

Congrats on that new grandbaby!

Congrats on your new grandbaby! What a birthday present. You sound like things have been a bit crazy over the summer.

ahahaha I am so familiar with blond moments lol if that was me though I am super clumsy it would have been a story about walking into glass not that that has ever happened :) ....Oh no Roman!! Lucy last year had a dog flu and terrible runs but with blood it was awful. They can have immodium a small dose if needed. Hope he feels better. And sorry to hear your not feeling your best. And sometimes I feel the same it is hard to blog when your not feeling up!! So glad you blogged anyways I will be praying for you. And Congrats on the new grandbaby how cute!! ttys Love Heather

p.s. I was so bummed today I called the kennel to see if I could go visit the dogs and they actually told me NO!! it is to disruptive to their day. I was so sad I was feeling a little homesick and wanted a big hug from them. What kind of Diva joint did I put them in?? I am disrupting there day can you imagine!! Lucy must be calling the shots over there lol!! I should have made them put her on the phone lol!! :)

Oh--good to see a post from you, my friend! Isn't it so hard to post when you're down--and you don't want to "spread it"! It's been hot here, too, and it seems to suck the life out of you!
Sorry about the Roman disaster--I know that was a real mess--and glad to hear about your sitting with the elderly lady. I know it is a good thing--you must be enjoying her very much--and she you! You will mean a lot to her, and you'll get some wonderful stories from her.

Oh that is funny. You sound really good. And that makes me happy;)

Nice to meet you.... following along with your blog now.

I am so glad Roman is still alive and living in your house... I wonder if he is banned from your Hubby's 'man cave' now though!

Your new grandson is adorable. I know how hard it is to have grandbabies so far away... our newest granddaughter is over 9 hours flight time away from us.