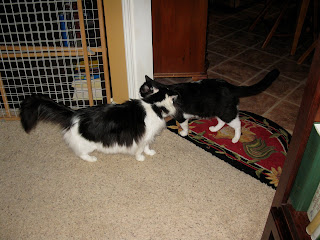 The cats are having a committee meeting to discuss.... 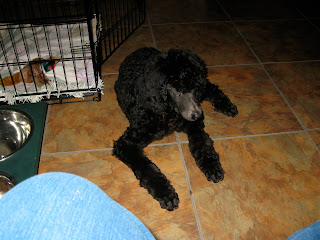 The fella who took over their house. They no longer are rulers of the roost. They have been temporarily moved upstairs so they can escape until they adjust.

He is definitely number one.

He isn't as big as he looks. He is a puppy. He will be 4 months old on August 9th so you can do that math.  What a sweetheart. Not ONE accident. He already knows what "go potty" means. He understands, no, come, and I LOVE YOU. He is adorable.

There is just one problem.

I can't call him Baby for the rest of his life. Especially when he is going to be a BIG dog.

I want to name him Reuben. Daddy isn't so hip on that. His daughter suggested "Rudy" which would be hysterical. All my pets have had the names of one of Lucy's pets. Well guess what? She had a PIG named Rudy. I am not thinking that my new baby is going to be named after a pig even if it IS cute.

I like Benoni too, it means "son of my sorrow." We thought about Gabriel.  I read through a dog name list and wrote down an entire page.

Can you believe we finally got a puppy?

He hasn't been here for 24 hours yet and we are BOTH just besotted, smitten, overcome, and in love. He is super smart and very laid back. He is lying on my feet while I type. I won't be here long because I have to go cuddle with him some more. His parents are both very large. His dad is HUGE! They have great bone structure and have a very lovely pedigree of champions. My big question was health. So far he has not had any dog with epilepsy or cancer. Good because that was a real heartbreaker. Rasmus will have been buried now for 3 years in October. It took us a long time to get over the heart break. Dad  wanted another black male PURE poodle, nothing else would do.  He said "no doodles no mixes," he wasn't going to budge on that.

Since it is my birthday this month I nagged asked daily. I know an opportune moment. I brought up a puppy every single day and then I found one.  He said yes finally, what else could the man do? I wore him out down. Then I showed him a picture and he got tears in his eyes. He said, " Yes, we want him, go get him".  He wasn't to far away in Louisiana. The little guy did well considering he had never been in a car, or a severe thunderstorm including thunder and lightening, or seen windshield wipers before. It was a good thing that I am a broken in mama and have been thrown up on, and drooled on before. I was prepared for that. After about an hour he laid his head in my lap and travelled very well. Bless his little heart. The first thing I did when I got home was take another shower, and clean up the car.

He checked out his new digs and approved. Since he is already crate trained I bought one. I'd rather have him in my bed. The Hunny said if the dog is in the bed he won't be. Shucks... 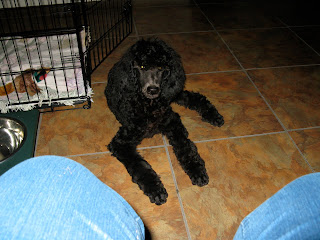 I love to watch him with the Hunny he follows him everywhere. Little tail wagging. Oh my heart be still.

If you want too you can suggest some names.

It is also perfectly acceptable to applaud, sigh, clap, or have a party.
Happy birthday to me!!!!
Posted by Karen Deborah at 8:07 AM

I am so happy for you! Nothing could be better for you right now. It is amzaing how they come in and take over our hearts with the first look. He looks a little like a "Jack" to me, or maybe "Jacque".
Enjoy!

Oh how BEAUTIFUL! How handsome he is! :) BTW - love the zinnia's in your header image! GORGEOUS! :) Hope the cats end up coming around to him. :) Artie

HURRAY! This will surely cheer you up a bunch. He is gorgeous. I am really bad at animal names. I have had critters named Baby, Blackie, Dutchess, Kitty... LOL see what I mean! He needs a dignified strong wonderful name. I do like Rueben. Noah? Josh? Have fun and enjoy that cuddling! Big hugs to that wonderful hunny of yours.

awwww, what an awesome birthday gift!!

Awwwwww... he's so cute! What a lovely wee dog you have there. I am not suggesting a name! It is so hard to find the perfect one...and we all have our own favourites! I'm sure you will find the perfect name for him.

Oh, what a wonderful "surprise"!! I'm so happy for you!

I think Rudy is an adorable name for him. It's just a name-- doesn't have to be after a pig!

Well.. he's ALL BLACK... and the All Blacks are our world famous rugby team! So a famous All Black is Doughie Howlett who has gorgeous curly black hair! So I suggest Doughie or Howlett! Or KIWI!

OH and he reminds me of a Wooly Bear Caterpillar.. so what about Bear?

I suggest Samson for a name...he will be big and mighty, saving you from your depression and he has beautiful hair!

Exactly what I was thinking! Happy Birthday, to you!!!
I know you have been wanting a dog for a long time. He will help you heal. Been there, they are amazing creatures put here by God for us to love.
I'm with Grandma Tillie, I like Samson.

The second I saw your message to look at the pics on your blog I KNEW you got a PUPPY!!!

You are totally going to have to teach me your mad nagging skillz!!! WOW!

Names... hmmmmm... Thanks a lot. I'm probably going to have a hard time paying attention in church later because I'll be thinking up names.

I like the name RANSOM. It's probably a bit too close to Rasmus though. It's my way of naming an animal after Jesus. LOL! And... no, I don't think that is sacreligous.

Great. I am going to think about this until you name him. Name him QUICK!

Oh, and we are getting little Taffy back from my Mom. Just wait until you know why! I'm going to blog about it.

(((BIG HUGS))) and cOnGrAtUlAtIoNs!!! You are the QUEEN of eventually getting what you want! LOL!

OH YEAH!!!!!!!! I am so happy for you! He is just beautiful! I love him! For some reason the name Bruno pops out at me. I don't know why. He looks too pretty to be a Bruno, but that is what I keep thinking when I look at him. :)

Congratulations and Happy Birthday! What a fabulous present! I have been nagging my hubby to get a dog too. I wonder if I have to wait until my bday. Hmmm. ;)

Reuben? Why not, but you have so many other names to choose from:
Dog names

I'm just catching up on my blog reading... and WOW! What a gorgeous little man he is! And what a perfect birthday present for you!
I'm so happy for you, that I could just burst!!!