She Is There Safe. 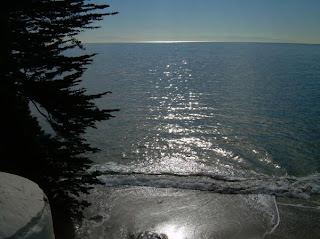 Heather took this picture. It's at Pleasure Point in Santa Cruz. She grew up there riding her bike and skateboarding around. She took this picture before she left, to move here. I guess she thought she could keep her love for this beauty satisfied with some pictures.

She kept in touch while she traveled and had quite a few adventures.
Her car broke down twice, both times a mechanic stopped to help her. the second time a man with seven children overheard her talking on the phone with a friend in Santa Cruz; as she explained her plight. When she hung up the phone he offered to take her in and help her with the car. Turned out that her Pa was right that the little Honda would not make a cross country trip. It died in El Paso, Texas. If you ever drive across country you realize just how big Texas is. It's one thing to look at that big ole state on the map and another to drive across it. It takes a day and a half at 80 miles an hour, don't you mess with Texas.

So with a dead car what to do. She called a friend, wired him money for gas and he came and picked her and the dad gum dog up. The dog ran across 4 lanes of traffic to chase some cows on one stop; big hint, that is what that dog should be doing! She would have been wise to find that rancher and offer him a cow dog. But who thinks like that at 19? I'm not going to tell you anything at all about myself at 19, besides, I can't remember.

Did I just tell a lie on a Sunday?

Okay, so I do remember and I am not telling. That was BC, before Christ.

What to think about this whole new twist in the road we call life? This is my take on it.

This girl loves California. She has a little brother and sister there, and they are with their mother. She knows what terrors she faced with a mom who is an addict. I think God had her go back, for them. I don't like the way she did it, but I do understand. Sometimes we just have to get up and go, I have been there and done that. What I don't think is that she left because she wants to surf.
Her siblings have been weighing in heavy on her heart for a while. Christians call that a burden. Sometimes God assigns us the job of caring for someone, either in a tangible way or in prayer; but they become our burden. Those are not unwelcome or unwanted, they are blessings, to be trusted with the hearts and lives of others. Her sister is 12 and her brother is almost 10. She hasn't even been able to visit with them, when she went back and tried, so it's been almost 2 years since she has seen them. I believe that they are behind what appears on the surface to be a rash, impulsive move. I think those of you who left comments were also right about everything you mentioned. Continue please to pray for her mission.

It's memorial day. A day to remember. This morning we were reading in Acts chapter 20, part of Paul's missionary journey. God had revealed to him that when he arrived in Rome he would be imprisoned and die there. Yet he did not count his own life dear, but set his face to go on.

Just as Jesus set his face towards Calvary and went there willingly, NO man took his life he laid it down of his own accord.

Just as men throughout time have fought and died and given their lives for their country and their families.

It is an incredible ability that men have, to face death and charge ahead.

Women are wired to protect and defend too, but differently. We look for escape, for shelter, to evade danger, to keep the hearth, to protect the young. All these films of warrior women pervert the true nature of women. Some may wield a sword but that is not the usual heart of a woman.

Men fight, men die, men give, serve, protect and defend. To all of them that have ever served, and are serving now; to those who have lost loved ones to battles and wars, giving the ultimate sacrifice of their lives. I say THANK YOU, words are not enough and you are all worthy
heroes.
Posted by Karen Deborah at 3:32 PM

I was so happy to see the title of this post in my blogroll. Thank God she's alive and well. Keep praying, woman. I will too. For her and the siblings in CA.

Thank God she is safe. You can breathe now! My son's car died in El Paso on a cross country vacation. It is not one of his best memories..;p

I will be praying sis...This was a beautiful post...Touched my heart. That pic is just beautiful.

this reaffirms that threr are good people still out there . Its helpfull to know that she found good people , or they found her in her time of need while traveling . we hear to many stories of this gone bad . Who knows maybe someday she will showe back up with two more kids in tow.

I am SO glad to hear she made it and is safe! Its glad to know that the Lord looks out for all of us right?!?!? LOL

Coffee man if she shows back up with 2 kids in tow I'll have a heart attack on the spot!

Glad to read that she is keeping you informed of her adventures along her journey.
I had to laugh at your response to Coffee Man.....

Trusting is the hardest and most neccesary when we are the most afraid! I will be praying with you!

I was just in Santa Cruz this past weekend visiting my daughter (she's at UCSC). California is a disater, but luckily there are still some good people out here. It's a blessing that Heather is is safe. I'll keep good thoughts for her.